Iceland’s East Coast seems to be the least visited section on the Ring Road. It’s on the other side of the country from Reykjavik so you don’t see the tour buses. And it doesn’t have as many “sights” and tourist infrastructure. But from my perspective as a photographer, all that’s to the good.

The eastern coast is classic Iceland though, long fjords punctuated by little fishing towns, snow tipped mountains and photo pull-off spots — if you take the time to see them. And spending a day or two enjoying the fjord country, stopping here and there, are why we do road trips.

Most folks do the east with a stopover at Hofn at the southern end and the regional center, Egilsstadir, on the north. You can do the trip in a few hours. But I wanted to explore the Stokkesnes area just above Hofn on a photo walkabout. Stokksnes was overcast and rainy when I was there but I saw a bit of the magic of the place and worth a stop for the photographer.

And I had heard that the most charming of the towns along the east is Seydisfjordur, a short drive east of Egilsstadir. So I broke the eastern fjords into a two days with my first night in Djupivogur, my second in Seydisfjordur.

About 25 miles past Stokksnes, you run into another little known photo op, a black sand beach located by the Hvalnes Lighthouse. By now the rain was heavier so I continued onto Djupivogur.

This section between Hofn and Djupivogur has a rawness to it. And on a cold day in May, I could have just driven to my warm hotel, that’s what I really wanted to do. But by now I was realizing that you take whatever Iceland gives you, that  the place is just south of the Arctic Circle and not a comfy tourist destination. And once I got my head around that fact, I started to see the beauty in the bleakness.

Djupivogur. Forty five minutes north of the lighthouse, you’re fully into fjord country at the town of Djupivogur. Djupivogur has a couple of nice places to stay and eat, a working harbor area, impressive swimming pool and 500 or so residents. I checked in at the Hotel Framtid, an old style place with wood-frame walls and an excellent restaurant. And, since it had finally stopped raining, I wandered along the harbor. 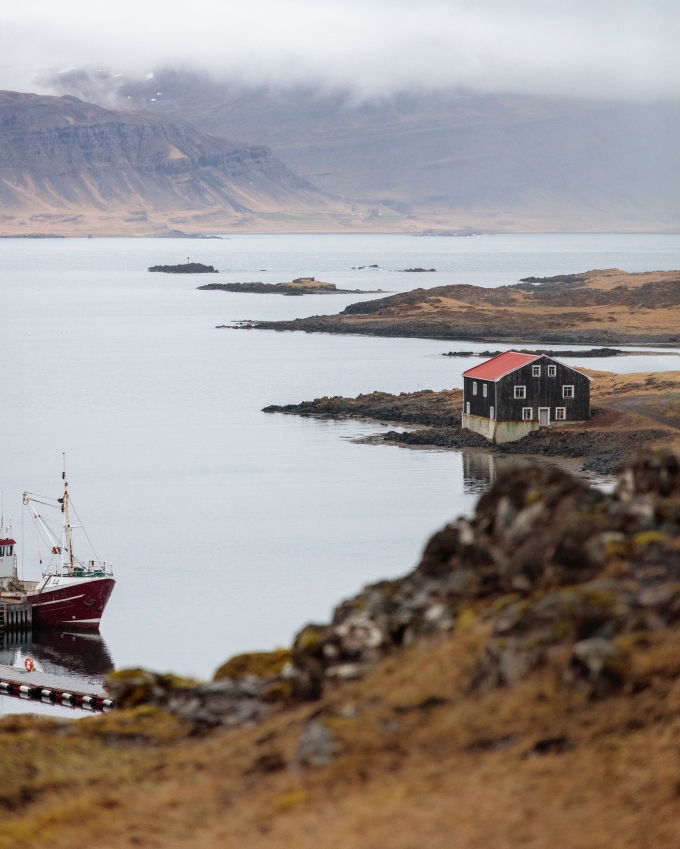 Djupivogur harbor as seen from a nearby hill.

My day had started with shooting Diamond Beach at 6 AM, then a couple hours in the cold rain at Stokksnes so I was ready for a nice meal. And the Framtid Hotel definitely did the job. Their restaurant has a great view of the harbor and fjord and great (and pricey) food for a town of a few hundred folks.

Their cauliflower soup was quite excellent. But I wasn’t. I’m not totally sure what triggered the attack, maybe exhaustion. Suddenly the posh dining room started spinning, my heart spiked, I was sweating. I tried to get the waiter’s attention. This was a serious attack and I had to get back to the room. When he didn’t come around, I made my way out of the restaurant, told the man at the front desk to bill the room. I made my way down the long corridor hugging the wall so I wouldn’t  fall.

The problem wasn’t the soup, not even the road fatigue. I had been having attacks of dizziness, nausea, loss of hearing for months on and off. And just before I left, my ENT doctor told me that I probably had a hole in the bone that separates the inner ear from the brain, a rare condition called Superior Semicircular Canal Dehiscence.

For the most part, the biggest hassle of this condition was a low grade motion sickness, no big deal. This perception that the “room is spinning” was something I had only experienced twice before, both times when I had pushed myself hard and done stimulants like caffeine. So this incident was concerning, it indicated things were progressing.

The symptoms did’t last long. I spent twenty minutes revisiting the soup, got cleaned up and went to bed. The next morning I was totally fine.

I didn’t need to think too much about my options. The spinning visual field symptom was rare. The other symptoms, loss of hearing, mild motion sickness, were things I had been dealing with for months. And there was no way I could fix any of this here on the road.

The only treatment would have required getting a Iceland doctor up to speed, doing a CT scan, neurosurgery, a month of recovery. (I’m saying this having gone through neurocranial surgery 5 days ago.)  My only takeaway was to listen to the body, get extra rest, make the most of my time. Life goes on.

The next morning was another easy day. An hour and a half drive along the coast, lunch at Egilsstadir, then on to my next night’s stay, Seydisfjordur.

At this point Rt. 1 hugs the coast, heading inland on one side of the fjord then heading east on the other side. It’s lovely country to drive through with plenty of nice pull-off possibilities. In fact, just on the other side of the fjord from Djupivogur, I found a waterfall that I haven’t found mentioned in any of my resource materials, not even in the excellent Concise Guide to the Waterfalls of Iceland.

Ring Road pull-off. The raggedy-edge coastline and mountainous fjords are part of what makes the East so distinctive.

Each fjord seems to have it’s own tiny fishing village with occasional tourist points of interest (the guidebooks cover this stuff better than I possibly could).

Tip: Most of the villages aren’t big enough to sustain much interest. But the little town of Breiðdalsvík, at the junction of Rt. 1 and 95 is a nice stopping point if only to stop at Kaupfjelagid, an old general store and cafe. The cafe is inviting and the folks who work there are helpful. In fact, that was where I found out about the national forest along Lake Lagarfljot, just west of Egilsstadir.

Eventually Rt. 1 gets tired of the fjords and heads northwest, up-valley to Egilsstadir, the only real commercial center in the East Coast.

Egilsstadir area. Egilsstadir doesn’t have much history (being founded in 1947). But it has several places to stay and eat. But there are several photo possibilities in the area: the famous Hengifoss waterfall, Lake Lagarfljot and Hallormsstadur, a lovely national forest with a bunch of hiking trails.

The arboretum in Hallormsstadir. With so few forests in Iceland, hiking in this forest park is a perfect change of pace. The tourist info center in Egilsstadir has maps.

Hengifoss and Litlanesfoss. There are a couple of  waterfalls on the lake’s far side, Litlanesfoss and further up-trail, Hengifoss. They’re about 20 miles from town on the other side of the lake. You drive right by Hallormsstadir on the way so it’s a nice twofer. Hengifoss is the better known — being the third tallest waterfall in Iceland. Litlanesfoss, with it’s basalt columns, is more photogenic in my eyes.

Litlanesfoss with its basalt cliffs. Hengifoss waterfall in the distance

Seydisfjordur. Egilsstadir is also your starting point for visiting the only truly scenic town on the East Coast, Seydisfjordur. Seydisfjordur is on another fjord, 20 miles east of Egilsstadir.  This fjord town was established by Norwegian fishermen in 1848. The village has some historical buildings and a thriving art community. The town also gets visited by a weekly car ferry from Denmark. I spent a lovely evening shooting there. 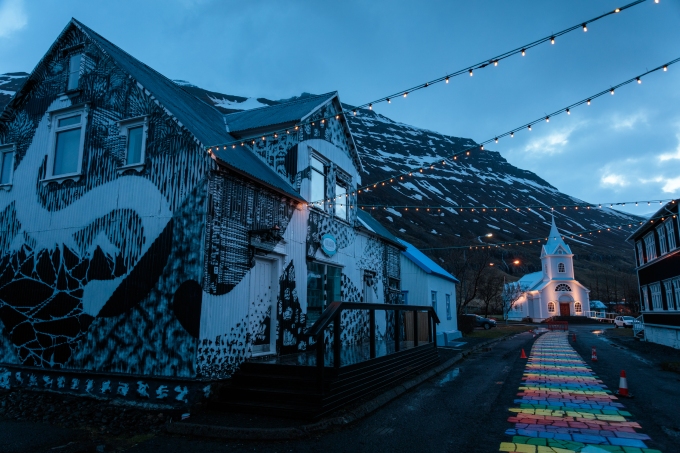 One of the art shops, along the rainbow road to the church

Skipping the eastern fjords. The eastern fjords are nice but someone who’s in a hurry can skip the northern section of the Ring Road and head straight northwest from Breiddalsvik to Egilsstadir on Rt 95. This option is only about a half hour less driving but you’ll be less enticed to stop.

← Welcome to Iceland
A Wind and Wave Experiment →