Once the band of Night Hawks was finished with the fountain display on Harbor Blvd., we walked down Swinford St. till we got to a little lagoon area. There are a bunch of  wooden posts rotting in lagoon, the LA Harbor cranes are just on the other side … and the mighty Vincent Thomas Bridge towers above.

I came late to the party, one too many fountains. But the group’s cool about sharing shooting spots. In fact these Night Hawks events all seem to have a supportive interaction with none of the turf battles you see at a spot like Mesa Arch. The main thing I (and everyone) attends to is not walking into someone’s shot.

I’d done this lagoon location about 9 months ago — and used the shot in my Dekor Gallery show. So on Thursday, I mostly played with subtleties of composition and shutter speed. From all my expeditions out to LA and Long Beach Harbors, I know that the water gets a nice sheen after 15 seconds or more of exposure. So I played with long exposure shots.

I kinda like including all four of the container cranes in the frame. It gives them more primacy in the image, weighting the eye in that direction. On the other hand going tighter with the same idea, i.e. bridge and cranes reflection, gives the image more impact. 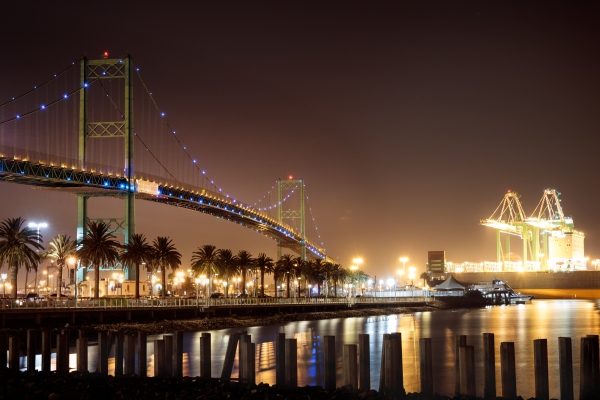 This one above was fairly similar to the shot I did for my gallery show in March:

The earlier shot is more zoomed in on the crane and bridge, less concerned with the scope of the bridge. The main difference between the two images is shutter speed, the one from nine months ago doesn’t care about that issue. Going long exposure is sorta overdone these days. But in this situation, with lagoon water already untroubled, you almost don’t notice the effect of a 30 second shutter. Instead your attention goes to the upper half of the image.

And in this situation, the smoothing effect of long exposure heightens the visual abstraction, heightens the play of color, smooths out the image’s dynamic range. On the other hand, at  1/50 sec., the light reflection in dark water is quite painterly and closer to what the eye sees. Both choices work.

After shooting at the lagoon for a bit we each went NE on Front St. for a quarter mile and turned left onto Knoll Dr. This hill is home to a baseball field and higher overlook for viewing Vincent Thomas. Here you’re able to catch the cars driving the bridge — and more importantly, the car head and tail lights. So a long exposure gives some cool light trails.

On this evening, there was a huge construction light set up on the bridge. It steals focus and is a hassle to remove in Photoshop. Plus, for some reason the cars were being held up on the bridge. So to get any decent light trails, you had to see when traffic was allowed to move.

On the other hand, this is a great angle to shoot the bridge from, a location I didn’t know how to get to previously. I’m sure I’ll be back once construction is less annoying and be able to explore more approaches.