I never did get a portfolio level photograph at the Seljalandsfoss waterfall on my May trip; after two days I was heading east on the Ring Road again. I caught Seljalandsfoss on a May morning, wind cold and blowing hard, I was seeing the place through eyes that’d already seen 20 hours of travel. Some interesting shots came out of it that first day and that isn’t trivial. I felt what I shot.

But I already knew Seljalandsfoss was capable of being one of those spacial places to shoot, one of those glorious, iconic shots to be had — I just hadn’t gotten it on my March or May trips. So when I did the Ring Road again in August, I stopped at some fav locations for a third bite of the apple. Seljalandsfoss was my final have to have before flying home.

I was eating at the cafeteria in Vik that final night (Icelandic char) and notice the weather had cleared. Good chance for a real Iceland sunset out at Seljalandsfoss. [I have a whole system in the evenings when I’m traveling, figuring which spot to shoot that evening.]

I scooted out of Vik by 7:15PM, did the drive west in under 40 minutes. When I got there, the last tour buses were leaving (look closely). It was only a few minutes before sunset. I grabbed my wide angle and tripod, jogged past a few photogs, dialed in my settings as I walked, headed into the cave. … Like I was doing a live performance. Showtime.

The dense mist behind the waterfall takes on an almost womb-like atmosphere. And you’re instantly wet. But get past that and it’s really a magical spot to be in. First because the mouth of the falls faces southwest. And sunset light filtered through mist is the magic. And then you see what that light does to the blanket of green moss…

I headed deeper down the path, watching how the balance point of waterfall, stream, moss and sunset changed. At one place on the muddy path, I felt to stop. This spot made me imagine that the cave itself had its eye on the light show.

[I’m sure there are some out there who question this passion for getting the shot. But it’s not some strange addiction (regardless of what Freud says). It’s just the feeling you get when you enter the zone — Watson the game’s afoot” or something. hey, who doesn’t like a sunset. This spot gave me the perfect line: waterfall, stream curving towards the sun and that concentrated yellow glow.

I stood, back against wall, so as to pull in those velvety, mossy boulders. That misty moss made me want to take my shoes off and wade in. (Of course I had to pull all that detail out of the image in post.) And of course, I had to wipe the lens off after each shot. I didn’t bring a dry cloth so my shirt did the job.

Didn’t do that many shot variations, the sun being so close to the horizon. Plus, I was pretty sure I had what I wanted. 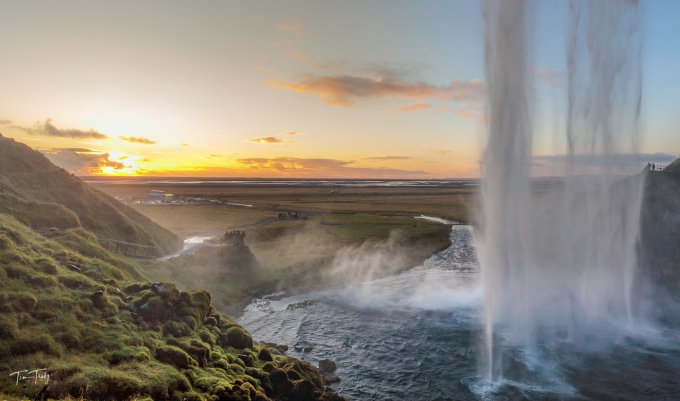