I just posted my full Iceland Portfolio here. As with my last portfolio, of Big Sur and the Monterey Peninsula, I used the process of post production to look at my work from outside in, as an artist’s self-portrait. That’s the value of process… looking at your new work, finding a few diamonds, polishing the facets with a hundred minute adjustments. Portfolio as self-portrait.

I guess some folks think post production is cheating, it’s not. A lot of enthusiasts feel it’s a distraction or necessary evil. Post is completing the image, allowing it to find full expression. And for a landscape photographer, Lightroom adjustments becomes a kind of journey, a journey where you listen to what you have and what works.

Putting these  photographs out there as a set, knowing the story behind each, taking each to the next level, seems to help deepen the craft. So here’s a few photos from the set with some of the backstory.

Note: If you check out the full portfolio, go full screen. These images come alive with more screen real estate. They need that to breathe.

Coming into the Country

After the hassle of a long, unpleasant flight, it’s nice to start seeing a new place. So once we had dragged our bags over the icy airport parking lot and got the rental car running, it was time to see the Land of Ice like a photographer.

The first thing I noticed was that it was cold, also the second thing and the third. It was just past dawn and the roads hadn’t thawed yet. My Denver friends, who’d just finished with winter, were thinking they should have dressed warmer. And I had come from LA.

At that point in mid March the light was gray and dull, the landscape was black and white.

Then we got to the Blue Lagoon. The steamy blue hot springs instantly expanded my color palette. After a soaking in the thermal springs, the mind started to open. And you noticed how people responded to this warmth in the midst of cold.

This image was an easy Lightroom journey to make. Someone entering a gigantic warm bath for the first time. A place too blue for reality, more like a Vogue cover. I had done a decent job when I framed this one, foreground subject, steamy mid ground, early light on the mountain behind.

In post, I tweaked the saturation up a bit to compensate for the low light desaturation. Gave more edge to the mountain, less edge to her but more warmth. I cropped her into the left side (rule of thirds). Plus I banished half a dozen folks from my shot for trying to steal focus from the heroine.

Curve of the shoreline

We had hours to kill so our little two-car caravan did a short tour of the south side of the Reykjavik peninsula. My sister kept an eye out so we stopped here and there for pics. This location demanded our attention. 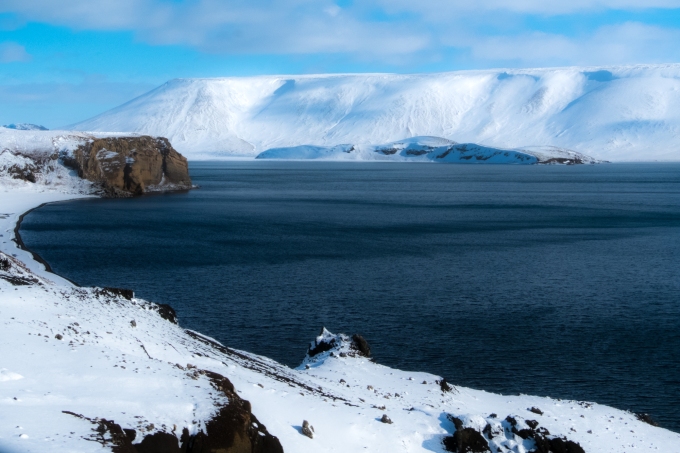 By now I was starting to get Iceland in focus. The white-blue landscape, the long mesas in the distance, and a lake. The shoreline was what got to me — dark, dark water, white curve of coast. I didn’t do much in post here. Recovered the whites, cooled off the sky, cropping to get a pure, abstract balance of the three elements.

There are 8 million stories in the city

Most of Iceland is huddled close to the city. That’s where the money flows, the tourist dollars. So, you have a traditional harbor area, a “High Street” with lots of wool shops, eateries, the historical center — and an edgy design sense. Reykjavik must have a ton of Millennials who are into design and you see the attitude on every corner.

Here the idea was to juxtapose a harbor scene with the street art. The image started working when I did a tight crop to balance out the two core elements, making the Coke truck a clear background element and pushed the palette and clarity towards an edgy b&w street scene.

This shot of a young guy leaving the City Hall building doesn’t look it but it’s a classic grab shot — shoot it before it’s gone. There’s a light rain smoothing the lake, the foot bridge is a perfect leading line. The trick was to frame the young guy at the right spot before the composition lost the human element.

My post production approach with this is simple on the surface, clarify each of the local elements. Sharpen the focus on the guy. Add clarity to the leading line and his refection as well as the branches that frame it all.

That’s all obvious Lightroom stuff. I also wanted to go against the cliche of the harsh city in the rain. So I took the other parts of the scene, the background buildings, the lake, all the negative space so to speak, and eased the palette into a soft mood by moving the adjustments for stuff like clarity, sharpness and color tone into the negative, into a pastel feeling. That seemed to give more density to the mist. 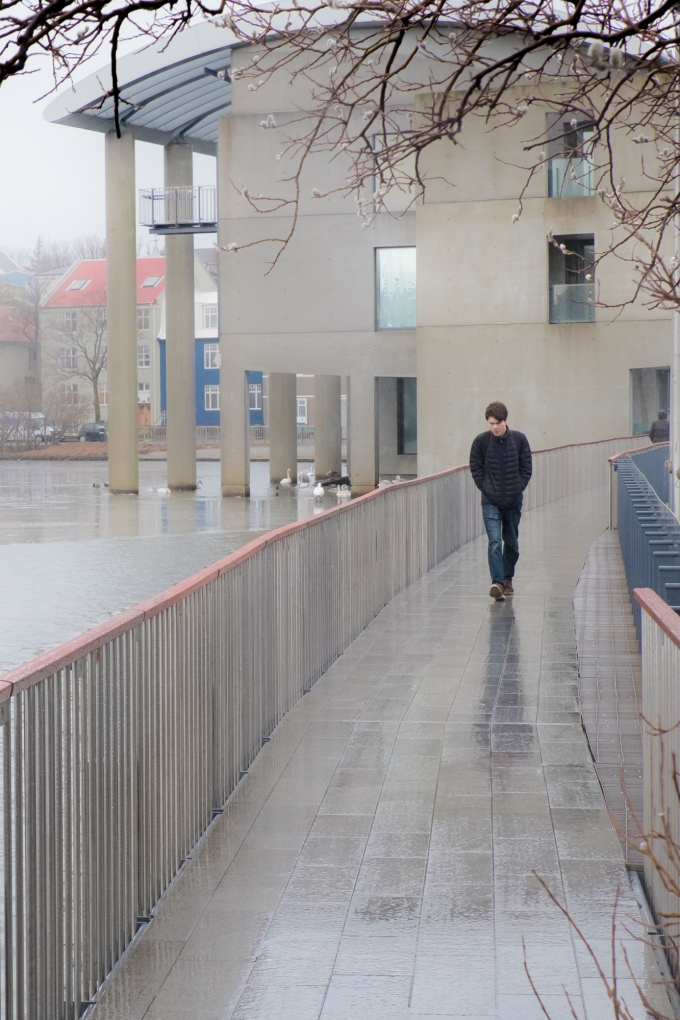 The shot of a blue hot spring next to Geysir was one I overlooked at first. I hadn’t seen any real visual relationship when I pulled the trigger (duh); it was just pretty. But last week, I took a second look at this one. I liked the soft blue of that hot spring. And when I cropped to pulled in more of the birch forest and mountain (on the left), that created a connection.

In post, that choice required adding some focus (contrast, clarity, sharpness) to the woods and hills on the left and deepening the blue of the pool. I darkened the sky — instant mood. I also added brushstroke adjustments to the fumes and clouds to create more rounded shapes.

Sculpting an image: The Troll’s Pulpit

I went to Dritvik as part of a tour of Snaefellsnes Peninsula. The day was fiercely cold, with waves and a nasty wind pounding the black sand beach and the huge stone that’s called Troll’s Pulpit.

When shooting, the tough part was to keep focus, find that core composition of wave and rock, while remembering to clean the spray off the lens after every shot. Later in post, I cropped the image tight in order to zoom in further on Troll’s Pulpit.

I darkened the sky and added a bit of color. But 90% of my time was spent adding dimensionality to the rock and waves. The challenge is that a camera works in 2D but the eye sees (and wants) that third D. So I wanted to reintroduce depth. This image is all about impact and the hard edge of this place.

Troll’s Pulpit Detail, after and before

Without getting to into the boring Lightroom stuff, the impression of depth comes by using the same techniques a painter uses; taking an object (a wave in this case), painting shadow and softness into one part of it, painting highlights, structure and sharpness on the part closer to the viewer. The eye does the rest.

Iceland has a bunch of places that get inordinate numbers of visitors. This country of 330,000, the smallest population in Europe, gets more American’s visiting each year than that (and that’s without counting Europeans, Chinese, Indians, etc. ). So a spot like the Skogafoss waterfall, just southeast of the city, gets jammed. When I showed up in late morning, the parking lot had 6 or 8 tour buses and it took a while to find a spot. Luckily I waved a magic wand and got a decent image:

What you don’t see is the 200 folks in magenta and orange and hot pink parkas — all standing between my lens and the falls getting facies. (That sucked.) Luckily there’s Photoshop. The alternative is to visit here before 9 am or after 6. The buses have mostly headed back to Reykjavik by then.

Seeing shots in the commonplace

The coolest thing about Iceland for a photographer is that there are an endless supply of great scenes that are less obvious and just off the road. These spots aren’t in the guidebooks or on any tours. You just need your own wheels and an eye for composition.

Church behind a sandwich place, Hellmar 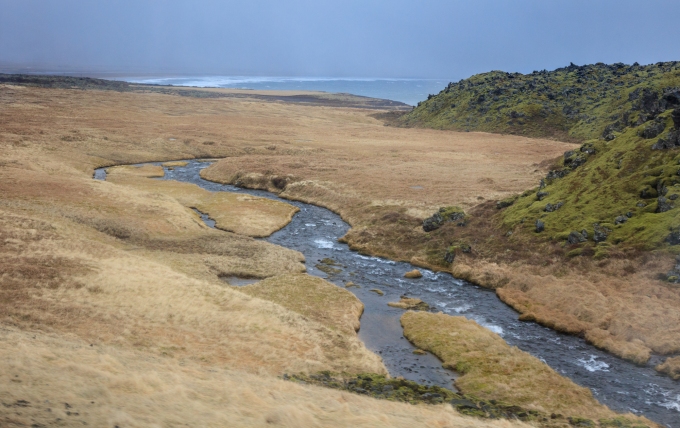 Shot taken from the tour bus (notice the foreground blur)

Pull off on Route 1 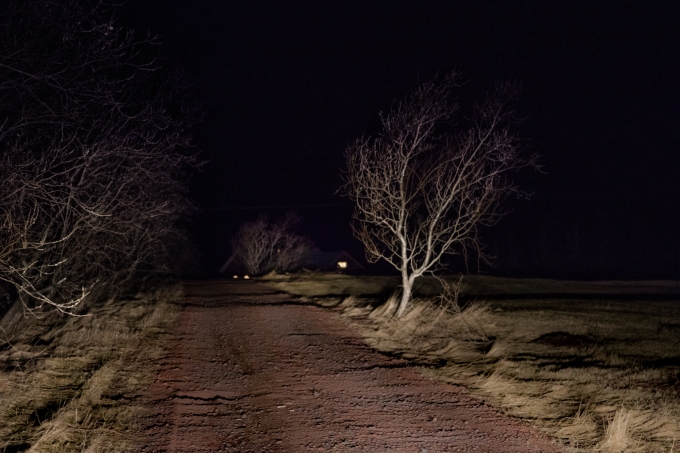 Driveway of my B&B