The Hike to Svartifoss Waterfall

Skaftafell National Park (now part of Vatnajökull National Park) is most known for the scenic Svartifoss, a basalt-columned waterfall at the base of Iceland’s largest glacier field. Hint: the hike to Svartifoss is also worth your attention. It’s good to keep the eyes open. Plus, other sections to the park have their own views, including glacier vistas. Skaftafell’s a worthwhile stop on a Ring Road tour.

I didn’t bother to show up at Skaftafell till about 9AM. If it’s a rainy day, there’s no point in catching the dawn light. So I slept in, enjoyed Skaftafell Hotel’s free breakfast and tossed my suitcase in the trunk. (I was at a guesthouse just east of the Glacier Lagoon that evening.)

Layout. The park is just a few miles off Rt. 1 and there’s lots of parking (you can pay for that at the park’s visitors center). The help desk folks are all knowledgeable.

A big piece of the park is glacier and there are several companies located to the left of the parking lot that do tours each day. In addition, there are a number of hiking trails criss-crossing the non-glacier section of park, that long spit of land (above).

The rangers all seem to be total pros. The guy I spoke with gave me some good tips as to the more photogenic trails. The S2 trail goes to Svartifoss, S1 goes along the flatlands to the base of the glacier. S5 heads up a ridge that overlooks the glacier and the eastern mountain range. That’s what I ended up doing.

The paved Svartifoss trail starts just left of the Visitor Center. It has a fair amount of vertical elevation at first, then the trail levels out. For me, things got interesting even in that first section of the climb, where there’s a small bridge over a mountain stream. From the bridge, the view was nice but with too many branches and brambles to get a clean shot. So instead of following the crowd up to the marquee event, I found a path down and in front of the bridge and below the overhang.

From here I was close to the stream and some good foreground choices. With a 15-35mm wide angle, the shot just fell into place. 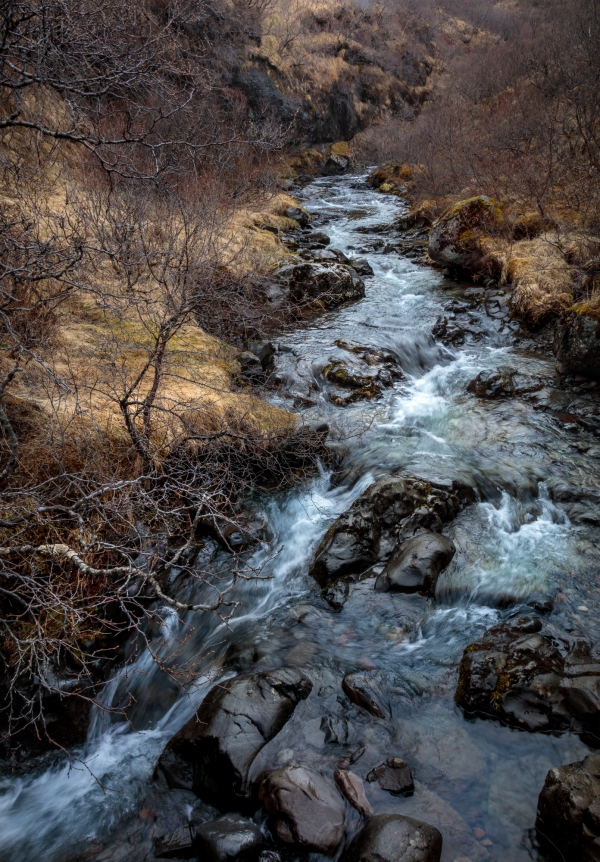 1/15 sec., F22 (All images are handheld, I didn’t bother with the tripod for the shutter speed I was going with.) 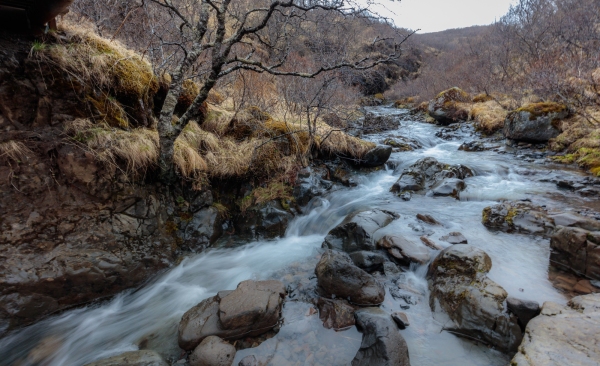 By now it was raining again so I grabbed the poncho from my day pack. After the terrain levels there are a couple of waterfall overlooks to the left, for Hundafoss and Magnusarfoss waterfalls. (Foss means waterfall.) Both falls have lots of vegetation so getting a clean photo is tricky. This one turned out OK. 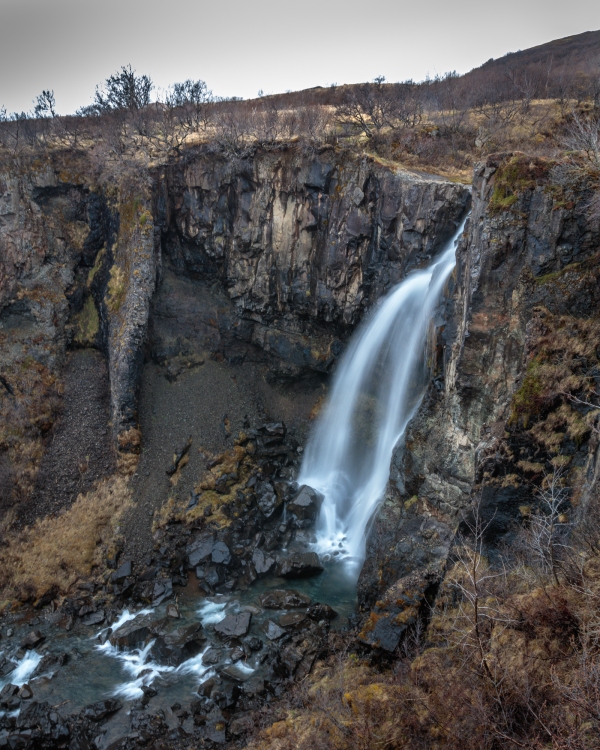 Not long after these waterfalls, you can see Svartifoss up valley. 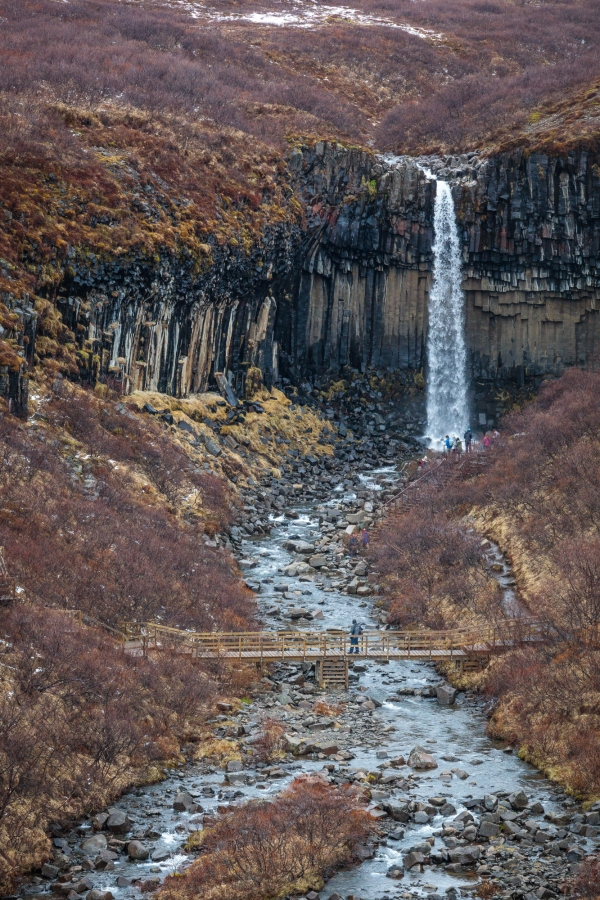 Most images you see of Svartifoss are taken from either that bridge or along the creek. Here I preferred to include more of the valley. Part of that was just the situation. The vegetation was just starting to take on that red-brown spring coloring. Plus from higher up, the valley, bridge, mountains behind become part of a context that humans are a tiny part of. These images remind me of the old Chinese pen and ink watercolors, a traveling monk lost in a vast landscape.

But here’s an example of a more standard Svartifoss landscape shot from below. 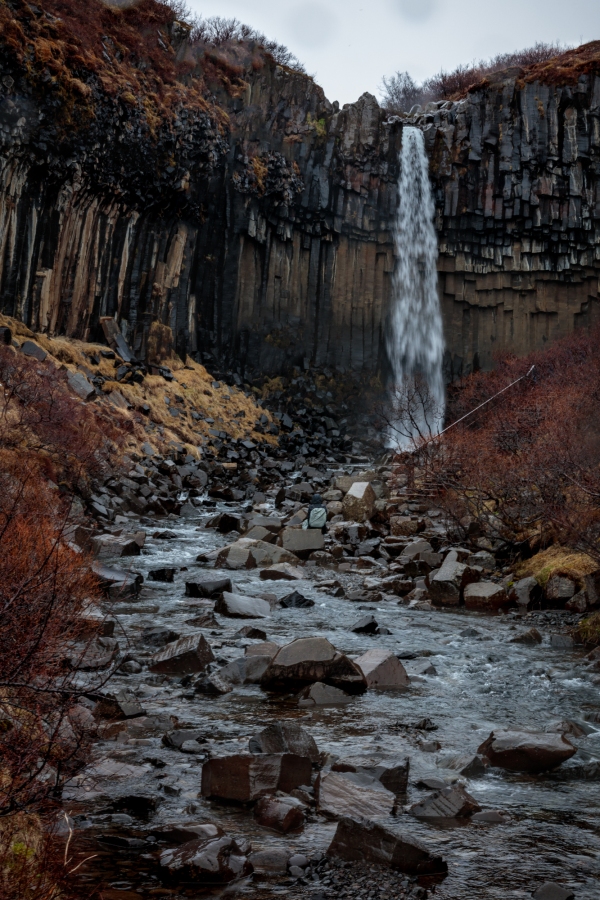 The waterfall and the basalt columns are a more central part of the image from this viewpoint. But the creek itself is visually busy with all the boulders. If I do a 500px search for Svartifoss, the images that hold my attention are mostly the long exposure ones. Doing a longer exposure here would have hidden some of the busyness in the creek behind the gossamer texture. But I haven’t seen many Svartifoss images that grabbed me.

I made one final discovery walking back. The Svartifoss creek and the trail were perfect leading lines for a photo of the entire area.

For a longer stay at the park, it’s worth it to hike a few miles more on the S5 trail — up to the glacier overlook. The easiest way to get there, if doing the Svartifoss trial (S2), is to look for a sign for Sjonarnipa. This is the S6 trail that runs into S5 (the trail number isn’t marked as such). It’s a nice trail that does a slow climb up the wide ridge.

After @ a mile and a half, you’re at an overlook of the glacier, Skaftafellsjokull, and the eastern mountains. Nice. 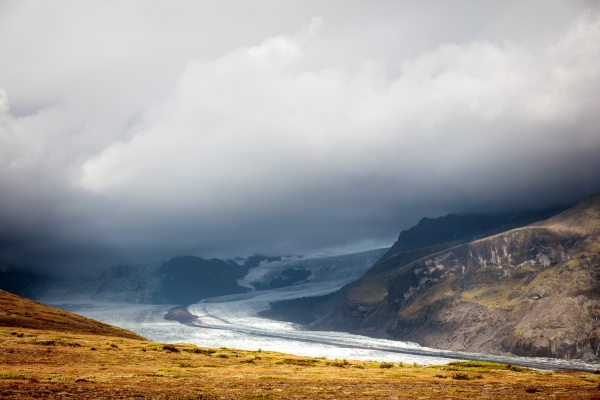 And heading back to the visitors center along S5 rather than going back the Svartifoss route the view continues.

Tip: After all that hiking, there’s a nice cafeteria (soup, sandwiches, dessert) attached to the Visitors Center that’s a good value and a great place to chill.