Siena and Tuscany: A Tour From Florence

While I was in Florence I did a couple of tours with Walks of Italy: their day long tour of the city and its museums and the day trip out to Siena, San Gimignano and a gaggle of Tuscan wineries. That trip had several photo locations that are worth mentioning.

The trip, like everything Walks of Italy does, was nicely organized. We all met at the Piazza della Repubblica and got to know each other. This was a 2 van group, so there were about 15 of us. All of the participants were interesting and no one who was a total wack job.

Our first stop was in Florence, the Piazzale Michelangelo. This site is on the far side of the Arno River at the top of the hill. It has a great view of the city and river. Not quite as high a view as you get at the top of the Duomo, but with the river stretching out into the distance, this overlook is better laid out for photographing.

A couple of the younger tour folks knew I was a photographer and told me I should come back to the overlook at sunset. They had been there the night before — along with 300 of their closest friends. I ended up taking their advice. And it’s definitely a better sunset shot than a morning one. But even the 10 AM shot isn’t bad.

Florence from the Piazza Michelangelo

After that, it was on to Siena. Siena is about an hour south of Florence by bus. The two had been rival city-states in the Middle Ages before Florence conquered it. But that may have been blessing for modern visitors because the city center hasn’t changed much in the last few hundred years.

Siena still has a ginormous center square surrounded by a clock tower, ancient 5 and 6 story buildings and restaurants. The town was two days away from the big event of the year, a no-holds-barred horse race they do around the square. But the place still has a classic Medieval look — in you have a wide enough lens to capture it all. 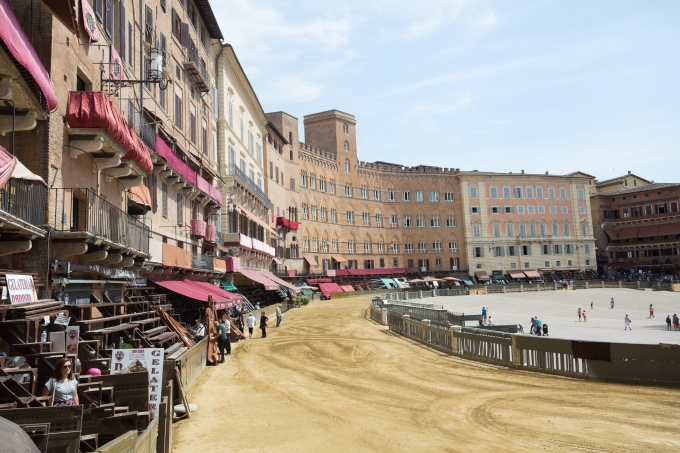 Our first stop in Siena was a church dedicated to Saint Catherine. The church isn’t much to look at on a good day. But the insides were filled with scaffolding when we were there. As a result, the only real thing of interest photographically was the place they keep the head of Catherine. Yes, they keep this saint’s head in the church. I guess worshiping body parts of holy people confers some sort of spiritual power. Yup, it’s kinda creepy – but fun.

But equally weird to me, the rest of her body is in a church somewhere in Rome. Deciding who would get what body parts must have caused some hard feelings back when.

After the Saint Catherine church and town square it was onto the main event, the Siena Duomo. The Duomo is the city’s primary church and the name relates to it’s importance as well as to the fact that it has a huge dome.

The place was built between 1220-1340. (Yes, they had cost overruns in the Middle Ages as well.) An additional section of the church was started but never finished because of the Black Plague. But even as is, the place is amazing. It’s not as large as Saint Peter’s Basilica in Rome but in my estimation this church is more interesting for a photographer than either St. Peters or the Florence Duomo. It just has so many design elements a good photographer can work with.

When I find a church as interesting as this one, I approach it with the same compositional thinking I would a great landscape. There’s a vastness to the place that’s similar to what you find at a great landscape. And you can shoot the location from dozens of differing angles to pull in different foreground and background elements. — The place has a ton of great paintings and sculptures to use for this and an architecture that can set them off.

The final design element of churches, the one I find most intriguing, is how the building shapes the light. These early church architects were quite brilliant in how they funneled light into a space. Their idea was to use light to suggest the vastness of the spiritual universe and the precious nature of the teaching — and encourage a deeper sense of reverence in the community.

So light from the stained glass colors the light in the area behind the alter. The light coming through the dome windows filters down from above and lights the gold leaf on fire. And of course, each of the side alcoves and arms of the church has its own unique lighting environment you can play off of.

For a photographer who like working with light, this church has lots of design surprises. But to me, the key principle is using the design elements and the light to take the viewer on a journey into this sacred space. 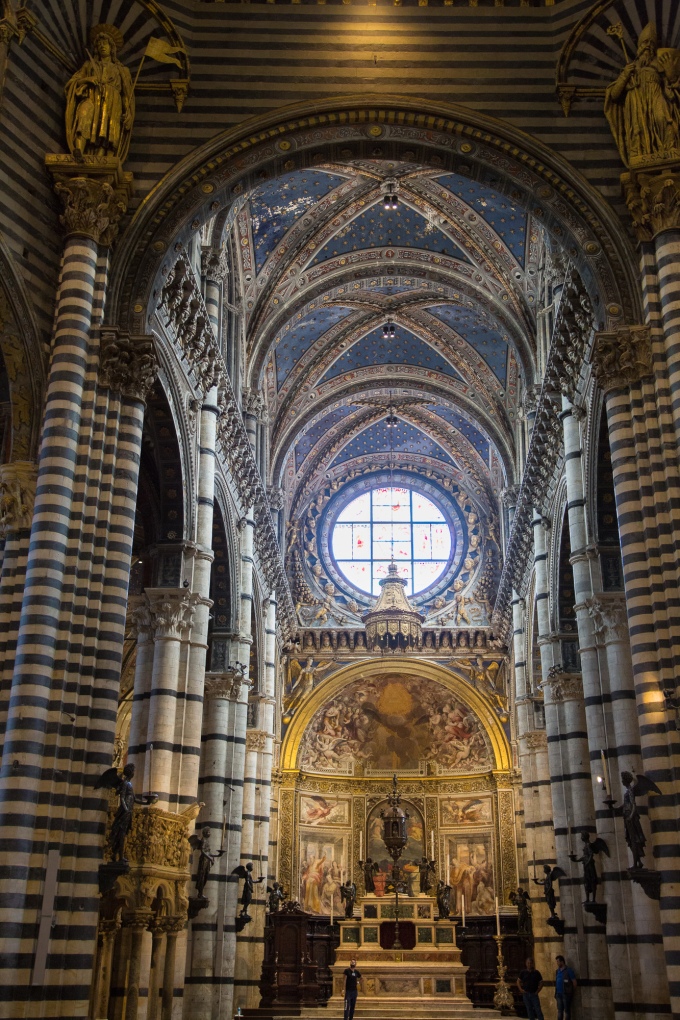 Main section of the church alter with the unique blue and white striping on the columns. Notice all the different light sources.

Using the light from the dome to evoke a sense of sacred space.

With this shot I was consciously using the columns and statues to lead the eye to the obvious goal, just as the architects planned. I also did some Lightroom adjustments to give the gold lit dome a different texture from the stuff below.  I also needed to pull back some of the blown out color in the dome’s skylight.

Here I zoomed in to capture one of the more unusual design touches. Busts of every single pope (there’s over 200) line a row along the top section of the interior. I used their faces to contrast with the blue and gold of  “Heaven” that can be seen behind the arch leading the eye into the church’s left side corridor.

And again, having so many superb design elements to choose from makes this church a must see. Plus, unlike St. Peter’s, I don’t believe this church has a single cherub. That’s an art atrocity that got popular during the Baroque and one I just don’t get.

After Siena, we drove higher into the Tuscan hills for a lunch and wine tasting. I don’t remember the name of the place, but it was a perfect choice for sampling Tuscan cuisine. After the obligatory tour of the wine cellar (that included a tasting of seriously aged balsamic vinegar), we sat down to eat. 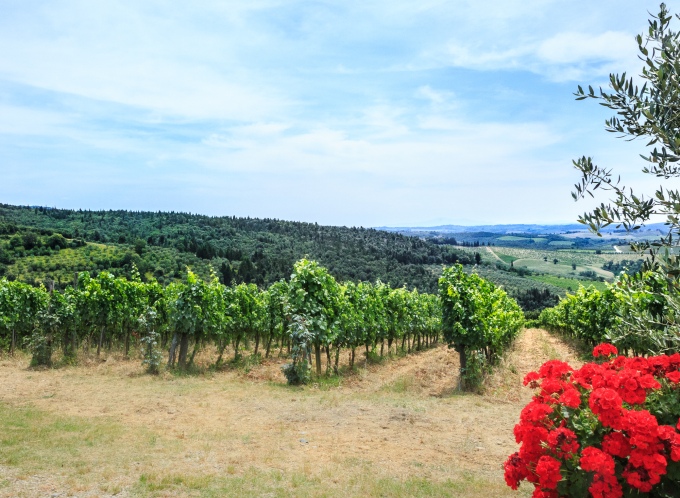 These folks put out an amazing spread: cheeses, breads, their own olive oil and honey products plus a steady flow of reds and whites to taste. I’m not a wine guy so I can’t remember any of the names — except there were several that they called “Super Tuscan.” No, I’m not sure what the superhero reference means.

The main course was my favorite. They served a lasagna that was to die for. Generally the problem with lasagna is that the pasta itself is so thick, it dominates the other flavors. But these guys made their own lasagna and it was about half the thickness of the stuff we’re all used to — tender with a subtle flavor. That was the best I’ve ever had.

After lunch (and some major wine purchases by most of the tour), we headed further into the Tuscan hills to a quaint Medieval town called San Gimignano. The place is even more fairy tale Medieval than Siena. The old town is on top of the hill with gates and a high wall. The place is mostly one main and a few side streets that wrap around the steep location. 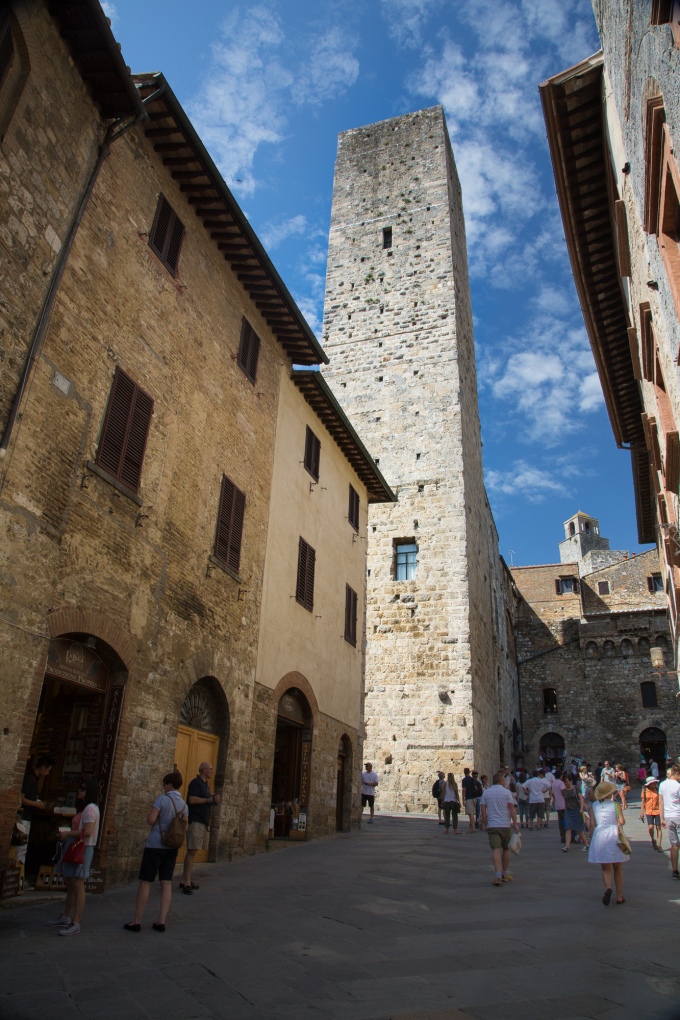 The most interesting element in the town are these high towers. The town has over a dozen of them. They go up 3 or 4 stories above the rest of the town buildings and are clearly used for fortification.

The story is that between 1200-1400 the town had some intense fighting between different families. And the families that could afford it, built these high towers so they couldn’t be attacked by rivals. Originally there were over 70 of these structures. Six hundred years later, there’s still enough left to make the place a World Heritage site.

I spent quite a long time at this location trying to get a good composition. But the square was so overrun with other tourists that this is as good as it got. This is the kind of place that gets inundated with tour buses from about 10-5 every day. So the only way to capture the mood is before or after that time. Here’s a classic San Gimignano shot: 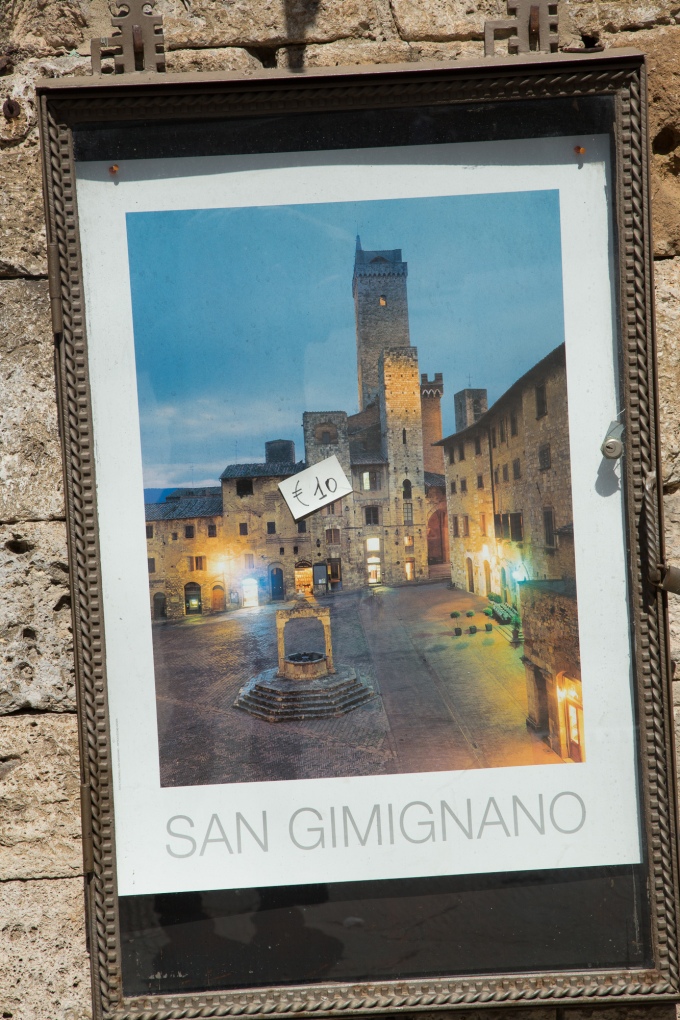 After regrouping and leaving San Gimignano, we had one more wine tasting just down the hill. The second winery tour  was overkill as far as I was concerned. How about a cheese tasting for a change or a chocolate tasting, even a pesto tasting would have been more fun.

But the vineyard did have a nice view of the town — if you had a good enough zoom. We were too far away for a camera phone to be effective. I finally got a shot of the old town with the sun drenching the high towers in late afternoon light. 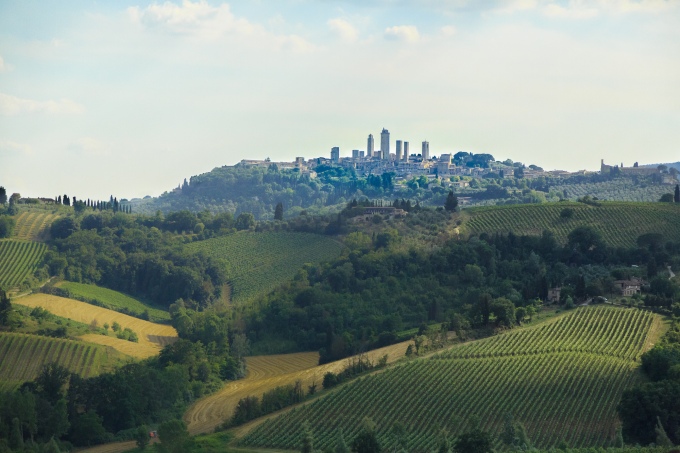 San Gimigano from the distance

All in all a great way to get a taste of Tuscany away from the crowds and heat of Florence. And the tour also fulfilled my deeper purpose, to get an idea of what parts of Tuscany to come back to later without the tour buses.