Once the band of Night Hawks was finished with the fountain display on Harbor Blvd., we walked down Swinford St. till we got to a little lagoon area. There are a bunch of  wooden posts rotting in lagoon, the LA Harbor cranes are just on the other side … and the mighty Vincent Thomas Bridge towers above.

I came late to the party, one too many fountains. But the group’s cool about sharing shooting spots. In fact these Night Hawks events all seem to have a supportive interaction with none of the turf battles you see at a spot like Mesa Arch. The main thing I (and everyone) attends to is not walking into someone’s shot.

I’d done this lagoon location about 9 months ago — and used the shot in my Dekor Gallery show. So on Thursday, I mostly played with subtleties of composition and shutter speed. From all my expeditions out to LA and Long Beach Harbors, I know that the water gets a nice sheen after 15 seconds or more of exposure. So I played with long exposure shots. 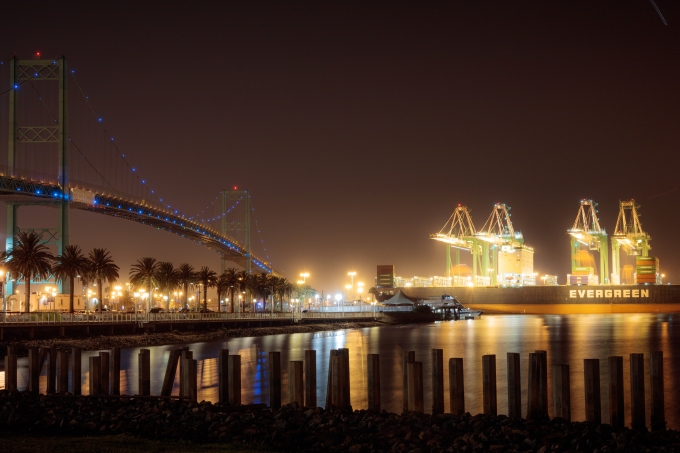 I kinda like including all four of the container cranes in the frame. It gives them more primacy in the image, weighting the eye in that direction. On the other hand going tighter with the same idea, i.e. bridge and cranes reflection, gives the image more impact.

This one above was fairly similar to the shot I did for my gallery show in March:

The earlier shot is more zoomed in on the crane and bridge, less concerned with the scope of the bridge. The main difference between the two images is shutter speed, the one from nine months ago doesn’t care about that issue. Going long exposure is sorta overdone these days. But in this situation, with lagoon water already untroubled, you almost don’t notice the effect of a 30 second shutter. Instead your attention goes to the upper half of the image.

And in this situation, the smoothing effect of long exposure heightens the visual abstraction, heightens the play of color, smooths out the image’s dynamic range. On the other hand, at  1/50 sec., the light reflection in dark water is quite painterly and closer to what the eye sees. Both choices work.

After shooting at the lagoon for a bit we each went NE on Front St. for a quarter mile and turned left onto Knoll Dr. This hill is home to a baseball field and higher overlook for viewing Vincent Thomas. Here you’re able to catch the cars driving the bridge — and more importantly, the car head and tail lights. So a long exposure gives some cool light trails. 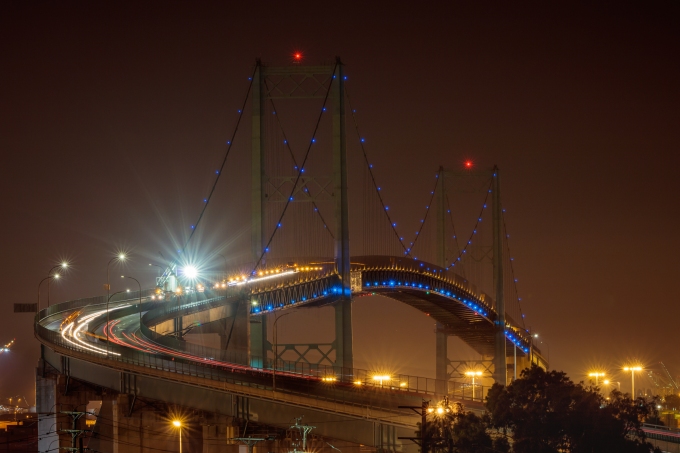 On this evening, there was a huge construction light set up on the bridge. It steals focus and is a hassle to remove in Photoshop. Plus, for some reason the cars were being held up on the bridge. So to get any decent light trails, you had to see when traffic was allowed to move.

On the other hand, this is a great angle to shoot the bridge from, a location I didn’t know how to get to previously. I’m sure I’ll be back once construction is less annoying and be able to explore more approaches.

I joined forces with the Night Hawks group, signing up for a photo adventure the Creative Photo Academy does. It’s the Paul’s Photo guys organizing a night shoot at some LA photo spot (for not much money) and everyone shoots their little hearts out. Mark Crase was on hand from the Academy to keep the cats together and for photo questions. Last Wednesday was a Night Hawks visit to a local San Pedro favorite, the Vincent Thomas Bridge.

I’ve shot Vincent Thomas at night before — I had a shot of that in my March gallery show in San Pedro. But I was hoping the Night Hawks would get me a new view to shoot.

We met up at about 7:30 at the fountains along Harbor Blvd. in SP. Basically these fountains are like a small town version of the Bellagio’s. The challenge is how to turn all that into composition. Here are some of my fave shots from that sequence.

The fountains have a pretty good design all things considered. Lots of nice angles, good use of the spotlights in the fountain. And once I got the lay of the land, I wandered down to this end to make the most of those elements. Plus the sun was giving off warm colors. I went with the long exposure to smooth out the light reflections in the water.

Finding my spot before the big show — and following the light. 25 sec, f22

Once the fountain began it’s sequence I found I had to shorten the shutter speed in order to record a smaller segment of the water dance. Going for  20 seconds (or 5) means you get too many different water effects one on top of the other. But tightening the shutter speed and triggering at the beginning of a new sequence gave me a cleaner look.

With darkness hiding all the crappy buildings in the background, I moved to this side of the fountain. By now, the lit wall around the edge of the fountain was golden bronze and I spent some time using that shape against the line of palms — while getting as much reflection as possible.

I was shooting the main fountain area once the show started again, without much luck. These fountain effects aren’t choreographed to please photographers. But I did get a few things.

Is this art or clash of cymbals?

Once the show got going I had more luck catching how the audience engaged with the fountain.

Next: Moving on to the Vincent Thomas

I’m trying to put together a gallery show and part of the show would include some long exposure night images of the LA/Long Beach Harbor unloading docks. I’ve decided on most of my faves but there were a few of the old images that are’t as powerful. So last night I was back out in the Nimitz Way section of the Long Beach docks with trusty tripod and my 5DSR.

The harbor area is  a great location for doing long exposure work. The water does nice things, the place is busy night and day — and even on Friday night, LA rush hour there was no one out there to hassle me. That’s amazing for a place that’s only a 10 minute drive.

Plus the artificial light is visually intense. A friend told me that the harbor is one of the most noticeable places on earth on images taken from space. That level of light spill is obviously a huge ecological issue. But it also makes for powerful images.

Given the lighting impact, I didn’t need to do much post work. There is no issue with a “natural” looking image when the lighting is so extreme and you’re doing long exposures. The main trick here aside from composition, is to have a good tripod and the right exposure.

Now that we live in San Pedro, I’ve been wandering down to LA Harbor for the occasional photo shoot. It’s one of the busiest ports for container ships in the world and just over the Vincent Thomas Bridge.

The scale of the place is amazing. And since they seem to work 24×7, the place is always lit up. So it’s great fun to work on night photography — once you figure out how to get around the warren of roads and detours.

A small section of the harbor facility:

And from Harbor Blvd. in San Pedro:

It’s impossible to get close to any of the harbor areas. But that offers creative opportunities.

The fact of night and a lit up environment gives the most everyday machinery a kind of mythic quality. 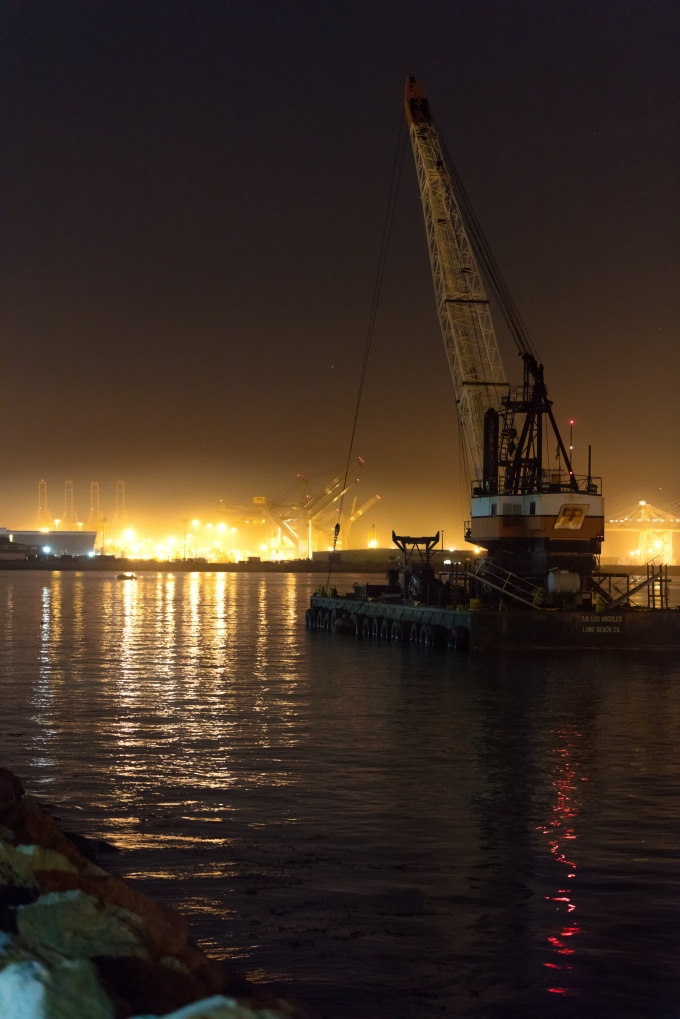 These loading facilities are all securely guarded and fenced off. They don’t let anyone use the bathroom  if you have a camera. But the main roads are public property. A few images from a pull-off on Navy Way. 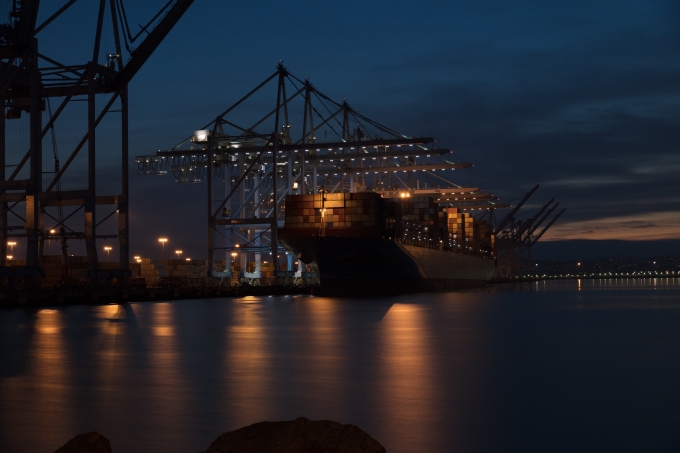