Beggar that I am, I am poor even in thanks.   Hamlet

When we went to Italy this June, I was struck by one image that kept repeating, of old women begging. Now obviously, living Southern California, there are no end of homeless folk who ask for donations.

Here in So Cal, we have a relatively predictable relationship with the homeless; so for me, the beggars of Italy were a dark revelation. And no, I don’t use the word “beggar” jokingly or as attack. No, it’s a harsh word for a harsh existence. And the particular homeless women that I’m writing about fit this old, harsh name better than any homeless I can think of.

Several of these homeless women of Italy yanked me around psychologically in a way the Santa Monica homeless never could. Sure, the general Italian homeless ask for money with the same mix of need and strategy as their homeless cousins in the US of A. But now I’m talking about the supplicant beggar-women.

When I encounter anyone asking for money, I naturally evoke standard mental screening, “Shields at 50 percent, Captain.” And I walk by without batting an eye.

But for the beggar woman, the shadow slips into a dark corner of my psyche while I’m looking away. She reminds me of how things were in the time of Christ, of the fact that he knew them fully. But as you walk by them, the only sense of Self is an abject quality I’ve never seen before.

For example, one day in Rome we were heading over to the Vatican. Ahead, a woman wrapped in black, sitting just off the sidewalk. Damage leg, twisted, splayed out in front of her, a wound she needed you to see. And as I passed, I was acutely aware of the intimate challenges she must face on a daily basis, dragging herself here and there. And my inner voice hears her saying, “If you can go to the Vatican and not give me something for my suffering, then how do you look yourself in the mirror.”

All the Supplicant women carry some of that power.

A Street in Florence 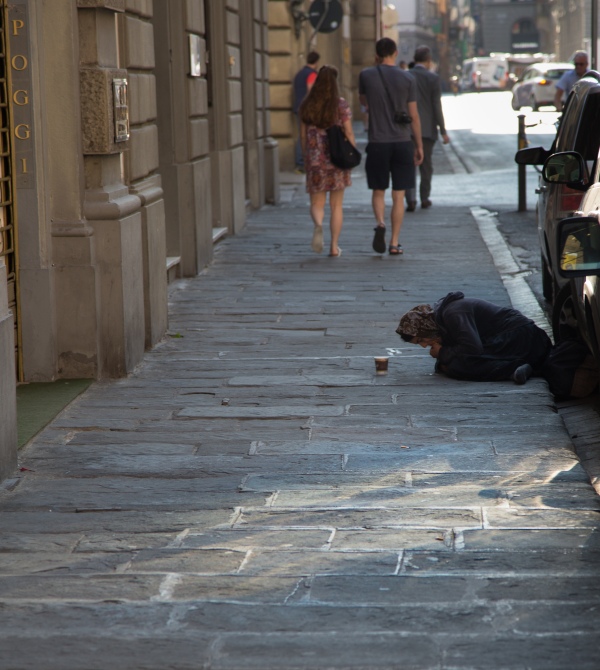 They maintain this kneeling down posture, head to the earth, donation bowl before them, asking for alms. They give you nothing of who they are. You judge them purely on what you see, dark, bent figure in the doorway, submitting to the harsh fates. No ego is shown, nothing you can use to judge. Some of these women never even voice their need.

It’s fairly easy for me to justify walking past an American homeless person. That’s what we all do, right? We decide not to give money to this specific person for a reason. The reason could be fair-minded and ultimately helpful to them, it could be mean spirited. But I can read America’s homeless  just a bit — where they might have come from, how they’ve fallen behind, what that pressure is behind the eyes. I can’t read the Italian supplicant ones.

And I guess what challenges me are all the resonances that she evokes in my psyche. The Jungian Shadow seems to cloak her. Beggar is a character steeped in an eon of subconscious conditioning, clothed in our worst fear — no, not death, but of being crushed by life so totally that you are totally dependent on the kindness of those who are afraid to look you in the face.

The Italians are used to it. They tell you, “Oh don’t give them any money, they are gypsies.” And maybe they are. I did witness a moment that made me wonder about the authenticity of the beggar-woman.

She was kneeling just outside the door of the church, in her pose of surrender. And then her daughter came up with a pack and pulled out her lunch. And the two sat together and chatted and ate lunch.

And after the daughter left, she resumed her position. And I have no way of judging whether it’s all a scam or whether this person really is living hand to mouth. But it is a cultural phenomenon and a different approach to life on the street than what we have in America. And somehow these deeper concerns made their way through my cultural filters.

← Siena and Tuscany: A Tour From Florence
Italy: The Street Artist →