In a recent Paul’s Photo trip, me and 20+ other photo enthusiasts did a night expedition to Chinatown and Union Station in Los Angeles. Union Station was built in the 1930s in a style that’s part Art Deco, part Mission Revival, part Raymond Chandler Hollywood. The place is the largest rail station in the Western US and gets over 100,000 passengers a day. …And Union Station is a fabulous spot for photography, especially at night.

Nighttime photos are great at this spot for two reasons. First, this is a rich environment for candid people photos. People come and go, following their dreams, dragging their baggage, waiting for a train to where ever comes next. … And at night, all their dreams and fears push closer to the surface. 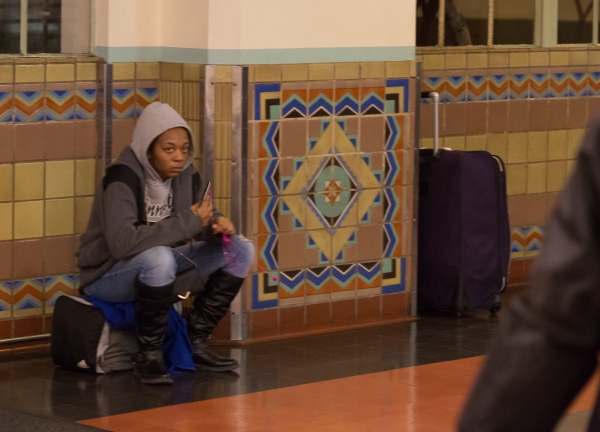 Waiting for the Train

The place is also great at night because the lighting makes it easier to focus on the purity of design. This station captures the DNA of LA like few other buildings. It’s on the National Historic Registry. And it’s been used as a location on more LA films than you can count.

Here are a few impressions on shooting this great location.

One of the best things about photographing architecture is to step back and look at a place in pure visual terms. In the photo above, the people are a secondary concern. Instead what we’re drawn to is the  Art Deco/Spanish Mission style — and the garishly perfect colors. Hey, we’ve got a train station and it’s fabulous in mauve. Add the row of palm trees and we know we’re in LA. The interior is equally elegant in design, as we see here with the Information Booth.

In both of these shots, I’m going for a formal composition. I’m standing on the center line of the hallway and have framed the image as precisely as possible. That allows the viewer to focus on the elegant lines of the place rather than the image itself. And even though there are people here, they don’t take away from the formality.

The floor tile-work leads the eye in and balances the huge windows on the left. Formal but from an angle.

Here’s another formal shot with a twist, of the station’s courtyard fountain.

Here I’ve lined up the tiles and the fountain fairly precisely, but opened up the framing to include the young woman. She’s almost a silhouette. But the light from the fountain adds a glow to her face, like she’s looking for her future.

In this one, I’m also going for a juxtaposition, of the station’s formality with nature — in this case a tree lit by Christmas lights.

Lights in the Courtyard

I tried several variations of this. But the key was to shoot the waiting room entrance in as balanced a way as possible — while angling myself to bring the tree trunk close to the door frame. The play of light on the two main elements in the darkness makes it more abstract. But you can also see the warmth of the waiting room.

Next Exciting Episode: Photographing People at the Station

One Comment on “Night Photography: Seeing the Art of Union Station”