I guess it’s possible to do landscape photography in Iceland and not shoot waterfalls (foss in Icelandic), but it wouldn’t be as much fun. New York art dealer types think images of waterfalls are cliched. But their idea of getting out in nature is a trip to the Hamptons. For a landscape photographer, the waterfall is a lovely compilation of the essential forces of nature, geology, water, erosion, light. For the photog in Iceland, the waterfall is a genre unto itself.

Given all the rain, the glaciers and a volcanic shape, Iceland has thousands of waterfalls. There are 100 or more that are named and worth visiting if you’re in the area. And like Niagara and Iguazu Falls, the more impressive ones in Iceland have personalities.

Godafoss, the God waterfall, is water falling along a curve. It’s also a name with a history, of Icelanders rejecting the old gods in favor of Christianity. Kirkjufellsfoss, the falls next to church-shaped mountain, is almost always shot with the mountain. Like Ben and Jerry, the two gain power by their proximity. Dettifoss is one of the largest waterfalls in Europe.

The Art of It

Proximity is the secret with shooting almost any waterfall because they are by definition about relationship. This creature exists as a total flow. The river reaching the lip of a high plateau, the falling part, the landing place, the lower river, it’s all of a piece. And as visual artists, our job is to choose how much of that complex shape we’ll capture within the frame.

That’s the general problem most photographers have, framing the essence of a falls. Anyone can take an OK pic of a waterfall. Waterfalls have inherent drama and even a bad picture of Gullfoss will impress.

But pointing and shooting aren’t enough for a good image. Instead of just putting the falls into a 2 dimensional frame, I generally try and think of the stages of the waterfall as taking place within three dimensions — like the beast is in real life. I want the eye to go on a journey back to the origin or on towards the downstream goal. 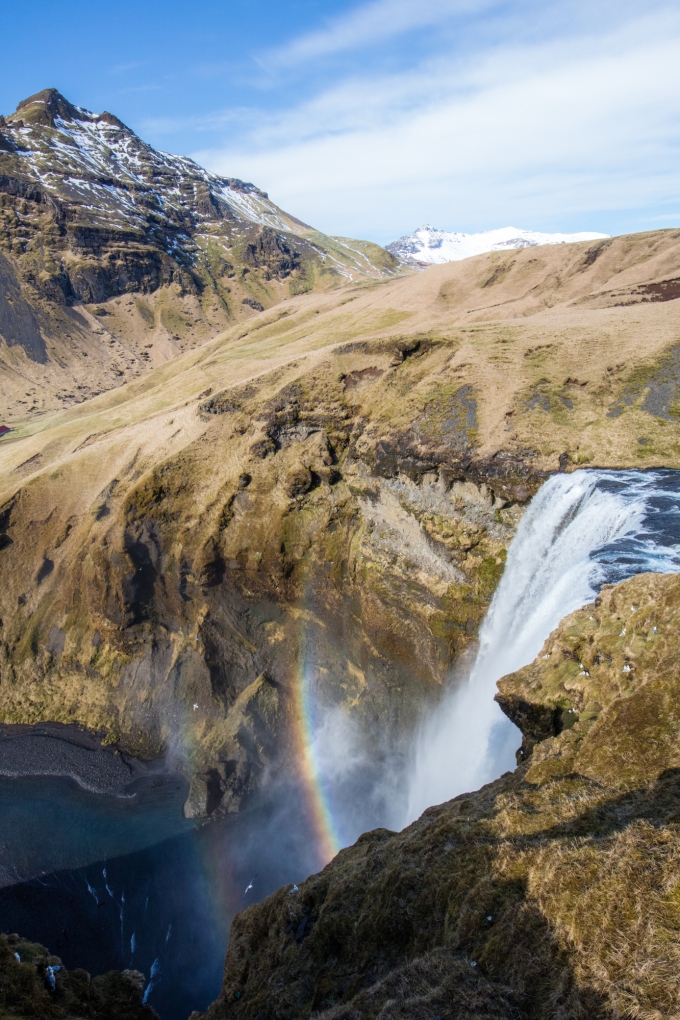 By taking the eye along a journey into the frame, we’re just using the mind’s natural tendency to dive into a reality. So, in the image above, the cliff edge is our foreground. Behind that, the water captures our attention and pulls us towards the mist and the rainbow and the ground below and finally, to the surrounding landscape. 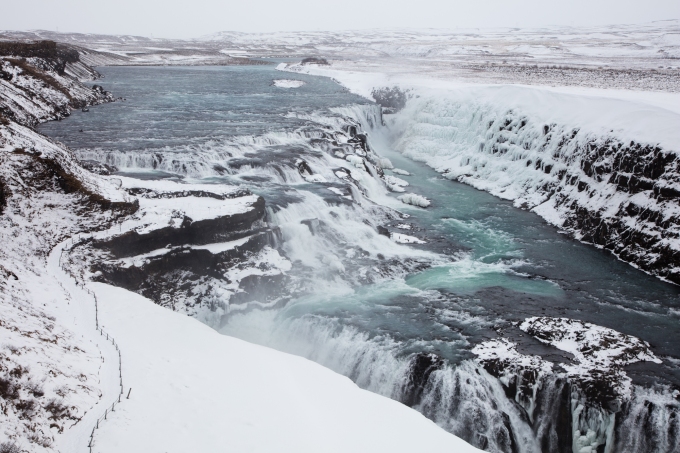 Take a sec to see how this Gullfoss image pulls the eye into the frame. …

First, the left and right river banks are leading lines, as is the little fence and walkway at bottom left. The churning white of the falling water also gets our attention because I set the shutter speed slow enough to cause motion blur in the central section. And of course, the green-blue coloring in the water also captures the eye, especially in a landscape so totally black and white. The eye wants to move upstream before becoming immersed in the details of this 3-level waterfall.

The inherent challenge with photography is that the initial image is essentially flat. The camera can only see in 2-D. Plus the RAW file flattens out color, contrast, sharpness even more. So the composition and the post-production needs to work overtime to give the image the immersive quality of our initial experience.