Stokksnes and the Viking Cafe

Just north of Höfn is Stokksnes, a little peninsula that’s one of the more intriguing photo sites along the east coast. It gets mentioned in a few guidebooks because of the Viking film set that’s on the property and the Viking Cafe. But Stokksnes is a true find for landscape enthusiasts.

I won’t speak for the Viking film set, I haven’t done that. But the black sand beach and small bay provides a whole range of photo locations when paired with the Vestrahorn Mountains just behind. Vestrahorn is craggy and foreboding, like a Norse myth or Grimms fairytale. And it’s worth a few hours of your time if you’re driving up the coast.

I made it to Stokksnes in mid-morning after stocking up on supplies at Netto, the Höfn supermarket. It had been raining and overcast for a couple of hours by then. So I almost didn’t bother to drive down the dirt road. The lady at the Viking Cafe offering to let me drive in without the fee just to check things out. But I paid the 8 bucks and drove in hoping things might clear up.

For the first hour, the rain was steady and the mountains were shrouded. I mostly stayed in the car. A guy parked next to me, wandered down to the beach. He came back. Then a woman came up from the beach in a wetsuit, dragging a surfboard.

Turned out they were visiting from the west coast of Canada. Surfing in mid thirty degree weather is no big deal for her. She warmed herself up and headed out again. I put on my poncho and down coat and followed her. She was making a game effort out there but the wind was making the surf too choppy for any clean runs.

It had been an hour and I still hadn’t seen the mountains. So I made my goodbyes and headed back towards the Ring Road. And then there were a few breaks in the cloud cover.

I could see this would be as good as it gets so I pulled over and took some shots, using the row of sand dunes as a leading line heading towards the mountains. [Later, in post, I used the dehaze adjustment to pull out more of the mountain peaks.]

The southern side of Stokksnes has some wetlands that stretched out into the North Atlantic. I used the straw colored grasses in front as an organizing design element — trying to capture the strange mood of the place. 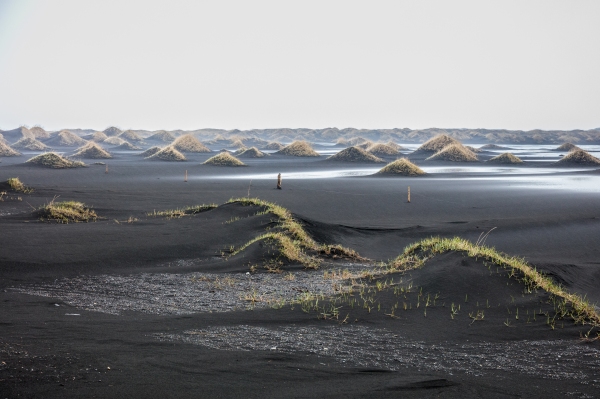 It isn’t a shot of Stokksnes I’ve seen anywhere. And my guess is there are plenty of other possibilities here. I headed back to Rt. 1 knowing I’d have to come again and do a full walkabout.

Stokksnes is about 3 miles north of Höfn on Rt. 1. A little sign for theViking Cafe has you turn right and head down the dirt road. Park at the Cafe.

Some on social media have groused about paying a few bucks to enter Stokksnes. But hey, it’s someone’s land, their livelihood. The fee keeps the tour buses away. And for the cost of a piece of cake, I can shoot a spot that’s unique and challenging; and maybe walk away with some images I’m proud of.  I don’t see the downside.